Get It Ballito & Umhlanga
Home FOOD Have a bite … at Shwarmatac!
FOODPEOPLEPersonalities

Have a bite … at Shwarmatac!

It was while he was marooned on an island (well, in his garden) and his wife was stuck overseas during hard lockdown last year, that Captain Paddy decided to turn his old speed boat into a shawarma-producing masterpiece. And we have to say, we are hooked!

If you’ve lived in Ballito for a while, chances are you’ve bumped into the Smiths somewhere along the line. Bubbly, outgoing and full-of-fun, husband and wife team Paddy and Heidie Smith have lived (and been involved in the hospitality industry) in the area for more than 21 years.

Paddy’s latest (and possibly most fantastic) venture sees him serving delicious shawarmas and pizzas off of what can only be described as ‘a food boat on wheels’ … and it’s already a massive hit!

Paddy is originally from Durban and he and Heidie moved to Ballito with the goal of starting a tourism business. “Before I could take my first tour group out though, my combi was stolen and that laid those plans to rest,” he laughs. 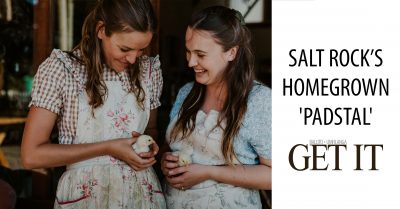 Having been involved in various businesses over the years, Heidie always loved catering and dreamt of owning a restaurant. The couple opened Blu restaurant and bar in the Ballito village in 2002 and that, they say, is where they ‘met everyone in town’. “Blu became a meeting spot for everyone and anyone. It was a great place to go for a drinks and food and we had loads of fun running it for four years,” says Heidie.

The couple’s next venture came in the form of an old canecutter’s compound on a family farm in Sheffield Beach. Canecutters, as it was aptly named, was renovated and transformed into a wonderful events and wedding destination. With rustic accommodation, 2km of private beach and serving delicious food, they hosted a number of conferences, team builds, parties, weddings and events over the 12 years that they ran the venue. It became a popular spot for long, lazy weekend lunches with lots of space for kids to run, swim and play.

This was also where they started the annual Litchi Festival, which has been running successfully on the North Coast for 16 years and is still a much-anticipated event at the end of every year.
While Heidie always worked hard in the kitchen and behind-the-scenes handling the admin, Paddy was the bubbly, front-of-house entertainment man … meeting and greeting everyone who walked through the door. When the farm was sold four years ago and Canecutters forced to close, he took up a job selling tractors at Sugar Coast Motors, where he still works today.

It was during hard lockdown last year that the idea of re-purposing the family’s 50-year-old, broken down speedboat came to Paddy. Heidie had gotten stuck in Belgium for six months (while working there as a carer) when lockdown hit, and Paddy, having to ‘fend for himself’, ended up making his favourite meal (shawarma’s) for breakfast, lunch and supper! “I sat eating my shawarmas, looking down at the once immaculate and now unusable boat and felt sad that it was just sitting there, going to waste. The boat belonged to Heidie’s father and we are very sentimental about it.”

“I came up with the idea of turning it into a mobile ‘food boat’ and the construction began!” Paddy spent days digging through his garage and store rooms, finding all the bits and pieces he needed, before setting about building Shwarmatac.
A wooden fishbone structure sits above the boat with Paddy’s old parachute as the roof. “I won’t lie, a tear was shed on the day I cut that up!” Ten wooden seats were secured onto and around the trailer and Paddy removed the engine to accommodate the stove, pizza oven and braai. “When you’re sitting down there is a bit of a rocking sensation … much like when you are out at sea,” he laughs.

So, what’s on the Shwarmatac menu? Well, apart from arguably the tastiest shawarmas in town (lamb, beef, chicken, vegan and even breakfast shawarmas), there are also delicious crunchies, coffee and tea for breakfast, fresh fish nuggets (served off the boat when available) and even a pizza oven and fold-out fire place for braais!
Shwarmatac can be hired out for parties, functions, promotions and pretty much any other event you can dream up! The food is fantastic and the drinks are cold … but biggest selling point without a doubt, is being served by Captain Paddy himself!

You’ll find Shwarmatac at local markets (the Sugar Market, Umhlali Market and at Tinley Manor Ski Boat Club), or follow them on social media to see where they’re going to drop anchor next!