It’s difficult to believe that the enthusiastic and creative doyenne of decadent donuts Jeanne Brooks – who also recently published her first book – was once insecure. That was until she discovered the secret sauce to unlocking her true potential…self-love.

At 41, Jeanne is a far cry from the sullen, broody teenager and self-conscious young person she once was. Today, the owner of Wicked Donuts (one of our favourite sweet treats) loves challenges, trying new things and thrives on creativity. She also believes that living for yourself is honourable, not selfish, and that self-improvement is in a weird way, ultimately self-defeating. And her writing, and publising her first boo, has taught her to overcome various challenges and has helped her to embody her most authentic self.

A Recipe for Miracles started out eight years ago as a personal experiment to test some of the laws of attraction. ‘I was at a point of feeling completely hopeless when I started writing, and as I wrote, it became evident that bad times don’t last forever and sometimes things have to fall apart for better things to take their place,’ says Jeanne (pronounced like the Jean in Jean-Claude Van Damme) as she turns the crisp pages of a her playfully pink-covered book.

Her story tells how she pushed herself to the brink, while navigating the competing forces of family, faith and mental illness, before ultimately finding success as a baking entrepreneur in Durban. The book documents her way out of unemployment and hopelessness. It casts the net out into the universe, and explores what’s possible when you start trusting and believing that things will work out for your highest good. ‘A Recipe for Miracles’ is an inspirational read for, young or old, who still believe in the combined power of miracles and tenacity.

‘I’ve always struggled with self-confidence. As a kid I was kind of like Eeyore from Winnie the Pooh.’ Jeanne reminds us that for decades children have fallen in love and resonated with characters whose adventures remain timeless and whose personalities and struggles are easy to grasp – Pooh is innocence, Piglet is anxiety, Tigger is boisterousness, and Eeyore… well gloomy, and not a fan of much perhaps?

‘As adults we tend to look at it that way but in the eyes of a child, Eeyore with his sad eyes and melancoly, represents bravery. If you follow the Disney show you’ll realise that Eeyore teaches two very important lessons by simply existing. He shows children how to include a friend who might not be as upbeat and chipper as the rest of the group and more importantly, he illustrates that it’s okay to be gloomy as long as it doesn’t consume you.’

It was in her adult years that she began to grasp that happiness was a state of mind and that the secret sauce to unlocking your true potential was (and always will be) self-love. ‘How do you achieve anything if fundamentally you do not believe you deserve to? We are our own harshest critics. We need to practice more self-love and really give ourselves a good pep talk every now and then.’

Working as a qualified beautician for 11 years, Jeanne says she got to the point where she knew she needed a change. ‘I’d faced many challenges in life, the biggest of which being diagnosed with depression and bipolar. I was scared it would limit me in my ability to achieve my goals, but I now understand that the only limits which determine how high we rise are the ones we place on ourselves.’

When it came to exploring a new career direction, Jeanne knew she had a massive passion for food but found it difficult to manage people and lacked confidence. ‘I had to start thinking about everything that made me feel better about myself and lean hard into that. Reading self-improvement books have always been a great help, and so I guess you could say, I climbed the hills and scrambled up rocky mountains, never giving up on my dream of becoming a successful business woman, and wanting to make my family proud.’

Soon Jeanne founded a truly wicked donut experience … delectable, gooey, warm rings of crispy fried dough that had everybody dashing out to try.  Made with her own signature recipe, her donuts are seriously addictive!

But then … 2020. The strain of trying to keep her business alive and supporting her staff financially and emotionally, while the pandemic forced her to shut shop for a while, had a huge impact on Jeanne. While exercising and keeping healthy has always been a great help to her in times of trouble, it wasn’t enough, and she found herself behind her laptop, typing as a means to process some of her thoughts, ideas and feelings again. This time allowed her to finally finish her book, one aimed at anyone who has lost their way in the world. ‘I hope more than anything that my book will inspire people to be brave; that it might give someone courage to start again, no matter how bleak the situation may seem. Covid has reshuffled the deck for so many of us. We have to go bravely where we have not been before, and in doing so, we give ourselves more opportunities to rise above our circumstances.’

Jeanne believes the best way to inspire is by being an example. She came up with her own quote: ‘You can’t tell people about magic, you have to show them’. She cannot emphasise enough how much we all have the ability to change our lives saying, ‘never underestimate the power you have and who you’re influencing.’

She says people need to see others who are on their level do magic. ‘By this I mean, achieve their goals, change their lives and rise up. It’s at this point that the impossible becomes tangible. Because your sister did it, or your neighbour or the plain Jane next door… that inspires me to be my best self, and I encourage others to find whatever raises their energy or vibration. Feeling good is a great confidence booster. Go bravely, and never ever lose hope!’

Her goal for 2021 is further self-improvement. ‘The only way to truly achieve your potential and become fully fulfilled is to, at some point, stop trying to be all of the things you THINK you should be, and instead be the person you were created to be. I’ve picked up some online courses and a couple of books as I’m always trying to be a better human. I hope to encourage others to realise that losing it all may be the greatest catalyst to starting over and creating the life of your dreams.’

A Recipe for Miracles is available on Amazon Kindle in e-book and Paperback version for R199 each, with 50 per cent of the profits donated to Gift of the Givers Foundation. 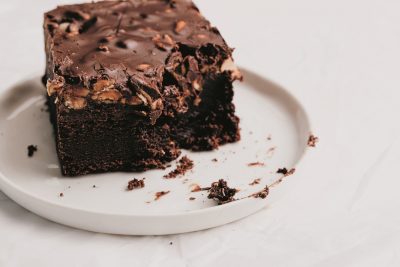 Preheat the oven to 350 degrees. Butter or spray a 9-inch pie plate or spring form pan. Set aside. Whisk together the flour, cocoa powder, baking powder and salt in a bowl.

In a medium bowl, mix the butter and sugar with an electric hand mixer, beat in the eggs and vanilla for 1-2 minutes, until the mixture becomes fluffy and light in color.

Add to the dry ingredients and mix until smooth, being careful not to over-mix as this will cause the brownie to be more cake-like in texture. Pour into the prepared pan.

Bake on a middle shelf of the oven for 25 to 30 minutes, or until a toothpick inserted in the center comes out clean. While the brownie is baking make the chocolate frosting. Combine all ingredients together in a medium bowl and mix on medium low speed with a hand mixer, until smooth.

Heaven on the table!

0
“Drinking good wine with good food in good company is one of life's most civilized pleasures”. These are the words of the late Michael...
Read more
FOOD

0
What started with a great idea in a home kitchen, an electric mixer and granny’s old bread slicer has now grown into 40 variants...
Read more
FOOD

Treat yourself at home with these delectable Society Cappuccinos recipes

0
When it comes to great-tasting cappuccino, there’s no need to leave the comfort of home! The premium range of Society instant Cappuccinos allows coffee...
Read more

Coffee shops with a cause

25th May 2020
We use cookies to ensure that we give you the best experience on our website. If you continue to use this site we will assume that you are happy with it.OkPrivacy policy