Nontsikelelo (Nontsi) Jiyane, a resident of Suideroord was recently crowned as Host With
the Most. She walked away with the grand prize of R10 000. Nontsi competed against fellow contestants Vusi Ndlovu from Glenanda, Jana Rau from Alberton and Makho Manyoni
from Soweto.

This sparkling lady clearly has a natural born talent, as the first things she tells me is, “This
was my first dinner party ever! When I entered I didn’t even dream that I would win! I just
entered because I am a huge fan of the show.” After entering she didn’t think BBC would
call, but they did, and much excitement followed.

Nontsi is an attorney by profession. She grew up in Soweto and later moved to Suideroord
with her family. She completed her matric at Mondeor High and from there went on to
study law at the University of the Witwatersrand. She completed her articles in Pretoria
and Mondeor and now runs her own law firm. She certainly is driven, has lots of passion
and comes across as fearless to achieve the things she sets her mind to.

“I adore cooking and trying new things, my interest in Come Dine With Me stems from
adoring food.” Nontsi’s menu was a reflection of the food that she loves, giving her guests an experience and a taste of what she really likes. She welcomed her guests with an exquisite bottle of pink bubbly and her starters were paired with a fruity Sauvignon Blanc and her mains with a soft Merlot.

Daringly, Nontsi made the duck for the first time on the day of the show, and she was delighted with the result. The Cauliflower steak was also a first, but she did put some practise into the dessert, this she served floating out of the kitchen on a hover board. “I’m quite good on the hover board, but I was pretty stressed about dropping the dessert!”

Her guests were impressed, not just by the dessert, but by this attention-grabbing piece of entertainment.

Her theme and dress code for the evening was A Touch of Gold, she used her grandmother’s set of gold cutlery and decorated the table to suit her theme. “I really enjoyed the décor side of it and absolutely loved doing the flower arrangements! I’ve had a lot of people asking me to cook for them, but I want to go and decorate as well!”

Her advice to future contestants, “Practise, think out of the box, look at what you’ve never seen on the show before and just be yourself!”

Nontsi shared a lot about herself to her guests, her journey and the tribulations she has personally needed to overcome. “I have realised that you have to love yourself, and accept
yourself for who you are. I don’t let negativity get to me.”

“I was so surprised when I won and completely taken aback! I really thought Vusi was going to win, I knew the incredible effort he put into his meal. I enjoyed the entire experience, the fantastic camera crew and my fellow participants. We all got along, off and on camera. It was completely natural.”

Nontsi would certainly do it again, and says that now she would really like to learn how to bake. “It was an opportunity of a lifetime and I am so grateful to have been part of it.” 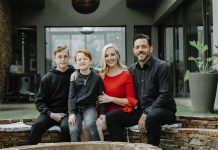 Make the best of every opportunity Make the best of every opportunity

9th May 2022
We use cookies to ensure that we give you the best experience on our website. If you continue to use this site we will assume that you are happy with it.OkPrivacy policy