Get it Joburg West
Home Kids The collectable toy beans that sprout with fun!
KidsPeople

The collectable toy beans that sprout with fun!

A hill of beans just so happens to amount to a wealth of fun when those beans are mighty. Mighty Beanz is the latest craze in collectibles for boys. Series one features 120 Mighty Beanz to collect, including rare, ultra-rare, super rare as well as the limited edition Golden Hero Mighty Beanz.

With this toy, the fun begins before the package is even opened. With the phenomenon of unboxing gaining even more traction, it is no wonder that Mighty Beanz features this exciting element that will keep kids guessing until the beanz are revealed.

To begin your ultimate unboxing, hit the top of the bean pod and watch the container pop apart from the inside before ultimately erupting in a flourish of fun. The opened bean pod reveals the Beanz, each of which has fun character artwork and a rarity rating to let you immediately know when you score an ultra-rare toy.

Megan van der Westhuizen, Marketing Manager for Prima Toys explains that part of what makes the Mighty Beanz so much fun is that they move in unexpected ways. “The ball bearing inside each Mighty Bean makes it move in unexpected ways, so you can have fun rolling, racing, and playing games. They’re also collectible and with over 120 types of beans in series one, you won’t run out of new pieces to admire while you play.”

What will you find in the Mighty Beanz 2 pack? Tear off the wrapper and find a collectable Beanz Container! There are 24 containers to collect! Inside each container, you will find 2 Mighty Beanz! There are 120 Mighty Beans to collect in Series 1. Look for Rare, Ultra Rare, Super Rare, Mighty Rare Beanz, plus Limited Edition Golden Hero Mighty Beanz! Around: R74.99

Slam the top of the Bean Pod and be amazed as the Bean Pod expands and bursts open! Inside you will find 8 Mighty Beanz and one Collector’s Guide! Around: R249.99 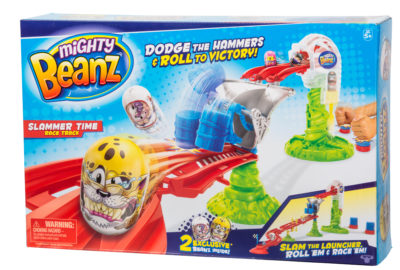 The Mighty Beanz Slammer Time Race Track is the ultimate race challenge. Slam your fist down onto the bellows and shoot your Beanz up the chamber and onto the racetrack. Dodge the hammers or become a battered bean. Will you survive the crazy crossover and be the first bean home and raise the flag? Includes two exclusive Mighty Beanz. Around: R499.99

Ideal for ages five plus. Find the Mighty Beanz at good toy stores and retailers countrywide. For more info go to www.primatoys.co.za

Sisters doing it for themselves

0
Starting a business midst a pandemic and economic gloom. Crazy or brave? For sisters Chantal le Roux and Monica D’Maye it was a bit...
Read more
People

0
With a twinkle and a flick, fairy godmother, Lana Joubert transformed the winner of our makeover competition into a woman who oozes confidence. Happy...
Read more
Kids

0
With the new Cadbury P.S. Duo, you can now share a message and your favourite Caramilk coated bar!Two separate treats made out of layers...
Read more
Health & Beauty

0
[email protected] Silverstar is open and has something for everyone - from family to adventure to thrillers & sci-Fi – they have it all.Catch a...
Read more

Buying shoes for Back to School: Top tips

Cyber bullying and teen girls: tips to help her cope

23rd Oct 2020
We use cookies to ensure that we give you the best experience on our website. If you continue to use this site we will assume that you are happy with it.OkPrivacy policy