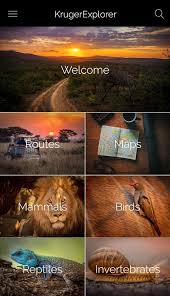 Regular readers know how much we love a bush escape… and we’ve just discovered the ultimate App for visitors to the Kruger National Park.

KrugerExplorer contains a massive amount of info… it’s like having your own, private, very knowledgeable guide (with all the insider secrets guides seem to know) in your pocket.

This field guide has hundreds of details you need… from animal profiles (did you know the civet is semi-dependent on water, so if you want to see one you need to look near a reliable water source?) to self-drive routes (more than 70 of them, so you won’t hit the same dirt road twice), new accurate and up-to-date maps of the park and so much more.

There’s info on mammals and birds, reptiles and invertebrates, on the flora and ecozones you’ll experience in the park. The routes include those for camps which are useful for overnight visitors, as well as routes more suitable for day visitors.

With more than 400 high-res images, and 300 000 words of content, this App is perfect for using while in the reserve, as well as for planning before you leave home.

It’s also marvellously educational… so great for kids. The App was created by Danny Broome and Charlotte Kirke, who are from the UK but have a love of Africa in general and the Kruger in particular.

“We’re very conscious that part of the wonderful experience of the Kruger is escaping the bustle and stresses of life – and for many people this means being offline.

“Ensuring the App works completely offline once downloaded adds a 21st century polish to a Kruger visit, while not impacting the bush escape experience,” they say.

The KrugerExplorer App is available for mobile and tablet devices and can be downloaded from the App Store and Google Play. Details: krugerexplorer.com.

“Otangs” in the Knysna forests He’s the author of more than 10 books… including The Secret Elephants, a culmination of many years of research into the secretive Knysna elephants.

The possible existence of relict hominoids is gaining momentum worldwide with ongoing research into Bigfoot in North America, the Yeti in the Himalayas and the Orang Pendek in Sumatra, and eminent conservationists and scientists – Dr Jane Goodall, Dr George Schaller and Prof Jeff Meldrum – have said they’re open-minded about their possible existence.

Gareth has heard many accounts, which he’s documented in this new book… most of them, he says, were spontaneous and unprompted. Fascinating – an exceptional natural history book (also available as an e-book). Tracey McDonald Publishers, R270.

0
Lowvelders Kim Springorum and Priscille Pepworth chat to us about their fabulous venture.Kim and Priscille, owners of Branch at Casterbridge Lifestyle Centre in White...
Read more
Lifestyle & Travel

0
We’ve been glued to our TV screens, watching all the highs, lows, battles and triumphs of the Olympics. Danielle Brittain is someone who has...
Read more
Reviews

0
We’ve been glued to our TV screens, watching all the highs, lows, battles and triumphs of the Olympics. Danielle Brittain is someone who has...
Read more

At one with nature…

11th Feb 2021
We use cookies to ensure that we give you the best experience on our website. If you continue to use this site we will assume that you are happy with it.OkPrivacy policy